Last Friday, Natasha from Maw Books hosted a party for the Utah Book Bloggers. We're just a group of bloggers from Utah that Natasha brought together on the Ning social network. Natasha's the kind of person who steps outside her own box and reaches out to others. I really admire her for that and am thankful to be one of those that has benefited from her kindness and generous spirit. Thank you, Natasha.
The party started at 7:00 and we were actually right on time. We ran into Suey and her husband as we were walking up the driveway carrying our contributions to the potluck dinner. Natasha answered the door and knew me immediately. Suey and I introduced ourselves to each other and I was embarrassed that I hadn't seen her blog (It's All About Books) before. I really should have found out who was going to be there and check everyone out beforehand. I was regretting my last several months of inactivity from the book blogging community. Lately it has been all I can do to post to my own blog a few times a month, much less to visit all the other book blogs out there. Anyway, enough of my lamenting, and I'll get back to the party. I have visited Suey's blog now and it's great. We have similar tastes in books so it will be fun to compare.
Others started to arrive. First was Jessica from The Bluestocking Society. I love the name of her blog. I want to change mine but I don't know if it's a good idea. Sorry, that was a tangent. Anyway, I found out that Jessica lives just a few miles from me and she's a lawyer by day. That she is a lawyer is simultaneously impressive and intimidating to me. No reason to be intimidated, though, because she is as nice as can be.
I forgot that when we first got there Natasha's sister Leisa was already there and Jenn from The King's English Bookstore was there. Leisa is the one who got Natasha started on her blog and Jenn is the Marketing and Event Coordinator at The King's English so she had a lot of information about books and authors. So did Drew, the manager of the U of U Bookstore, who came in later. Jenn and Drew talked about a bunch authors that I had never heard of. It sounds like they have really fun jobs. Stephanie from The Children's Literature Book Club came too. She has a Master's Degree in children's literature. Very cool. The last blogger to come in was Cari from Book Scoops. She, like Stephanie, also blogs mostly about children's literature.
James Dashner, who blogs at The Dashner Dude, was the last guest and he was no ordinary guest. He's the author of The 13th Reality Series which has one book out, another coming in March, and he has a third unrelated book coming out at the end of the year. It was really fun picking his brain about what it's like to be an author, how publishing and editing work, and other behind the scenes stuff. One interesting thing about him is that he never watches movie previews. He started this a few years ago and says his movie experience has been so much better since. He said that when he goes to the theater he turns his head away from the screen and listens to his ipod or makes his wife talk to him to avoid watching the previews. Interesting. I'm not sure I could do it but I might try the experiment. Anyway, James is funny and nice and though I haven't read his books yet, I'm already a fan.

So here we all are: 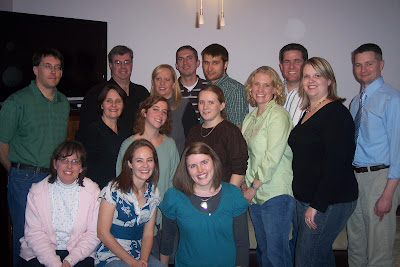 Back, left to right: Suey's husband, Drew, Drew's wife, James, Cari's husband, my husband, Jessica's husband.
Middle: Leisa, Jenn, Cari, me, Jessica
Front: Suey, Natasha, Stephanie
(Sorry, I forgot some of the spouses' names so I'm not going to write any of them. Natasha's husband was taking the picture. He is also a really nice guy.)

We had such a great time at the party and I loved meeting everyone. Even my husband had a great time. I look forward to more blogger parties in the future.
Posted by Kim at 12:36 PM

How fun! It is too bad my husband decided not to go to BYU for his masters degree because then maybe I could have joined you all. :-)

Not quite the Bradys said...

THat sounds like so much fun! I'm glad to know that I'm not the only person who's been under the radar for a while. : )

That sounds like so much fun to actually meet with other bloggers. What a great idea. I'm going to have to check out some of the blogs that sounds new to me.

Kim - It was so nice to meet you. I look forward to more blogging events.

What a great synopsis of the party! Makes me want to do it all over again!

I'm, right at this moment, making a Google Reader folder of all the Utah Book Bloggers Natasha listed in her blog, so this means, I hope, that I'll be dropping by much much more often.

It was great to meet you!

Ack! I never commented on this post?! How shameful of me!

I am so happy that we all got to get together! I'm really looking forward to it.

And to Suey - I have a Utah folder in my Google Reader too!

Kim
Utah, United States
Stay-at-home-mom to 4 great kids and wife of a quintessential entrepreneur. Lover of all things books. Runner.

I love books and I love to read almost anything but I don't like unnecessary sex and profanity. I looked on the internet for lists of good, clean books and found a few but many of them only listed inpirational and Christian novels and I wanted to read more mainstream books--I already knew those books were clean. I wanted to know if the books that were creating so much buzz were worth picking up. I don't need books to be squeaky clean, I just don't like books that have a lot of junk just because they think it sells. So I started Good Clean Reads to make my own list of good clean books and also to warn other like-minded people about books that are questionable (in my opinion). I don't really claim to know what I'm talking about when it comes to reviewing books, but I enjoy doing it and hope my reviews help you.
Kim's bookshelf: read

Here's my thinking. I wanted to catch up on some reviews of books that I read a while ago. Since it's been a while and I didn't take notes, these reviews won't be as accurate. So I decided that they needed a name. My first idea was to call them "Catch-up" reviews. I didn't really like that so catch-up led to ketchup, which made me think of our favorite brand Heinz, and that led me to Heinz 57 because there are somewhere around 57 books that I'd like to review. So, "Heinz 57 reviews" it is.

If you would like to contact me for any reason, you can reach me at cleanbooksgal (at) gmail (dot) com.